HG Wells and a Precursor to Little Wars 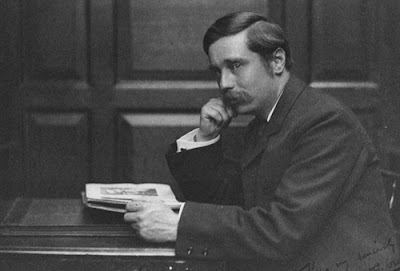 I have been reading some of H.G. Wells of late and came upon this interesting passage in a fictionalized "intellectual autobiography" of a character named Richard Remington entitled, "The New Machiavelli" written in 1911 which is an account that seems loosely based on his own experience in political life. In it there is a fascinating section describing his boyhood (16 year olds) friendship with a person named Britten and he describes in the following section a very interesting take on imaginary battles that would come to fruition in the "Little Wars" written in 1913 that we all know and enjoy:

"We confessed shyly to one another a common secret vice, "Phantom warfare." When we walked alone, especially in the country, we had both developed the same practice of fighting an imaginary battle about us as we walked. As we went along we were generals, and our attacks pushed along on either side, crouching and gathering behind hedges, cresting ridges, occupying copses, rushing open spaces, fighting from house to house. The hillsides about Penge were honeycombed in my imagination with the pits and trenches I had created to check a victorious invader coming out of Surrey. For him West Kensington was chiefly important as the scene of a desperate and successful last stand of insurrectionary troops (who had seized the Navy, the Bank and other advantages) against a royalist army—reinforced by Germans—advancing for reasons best known to themselves by way of Harrow and Ealing. It is a secret and solitary game, as we found when we tried to play it together. We made a success of that only once. All the way down to Margate we schemed defences and assailed and fought them as we came back against the sunset. Afterwards we recapitulated all that conflict by means of a large scale map of the Thames and little paper ironclads in plan cut out of paper.
A subsequent revival of these imaginings was brought about by Britten’s luck in getting, through a friend of his father’s, admission for us both to the spectacle of volunteer officers fighting the war game in Caxton Hall. We developed a war game of our own at Britten’s home with nearly a couple of hundred lead soldiers, some excellent spring cannons that shot hard and true at six yards, hills of books and a constantly elaborated set of rules. For some months that occupied an immense proportion of our leisure. Some of our battles lasted several days. We kept the game a profound secret from the other fellows. They would not have understood."

If this bit of the Wells story is even partially true, it would seem that the idea of wargaming with toy soldiers had occured to him at least 20 years earlier than the writing of Little Wars. I was also taken by the idea of gaming while walking... it reminded me of the late Paddy Griffith's experimental wargames staged outdoors. 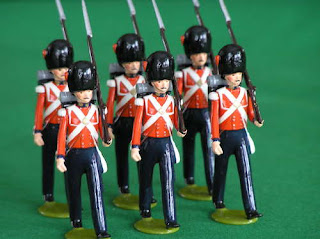 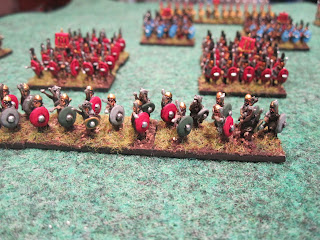 Into another auction here at the Lead Gardens (my oldest daughter needs dental work...)
So I have three 10mm Armies based for Warmaster up for sale on Ebay.
(here is the link to the motley but tough Carthaginians:  LINK )
(and the stolid street brawler Romans: LINK )
(and those crazy inventive Greeks from Syracuse!: LINK
These three armies would make a good set of Ancients to make a nice Punic Wars Campaign. Hate to see them go but my fatherly duties call... 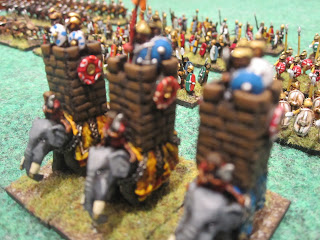 A Good Game for the Beginning Gamer 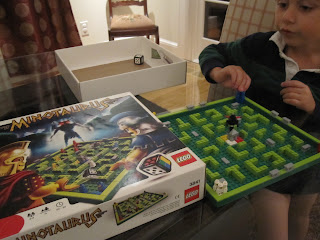 My 5 year old son and I have been collecting the new games from the LEGO company and playing them to see which ones are good...and we have come to the conclusion that the "Minotarus" game is the best of the lot... 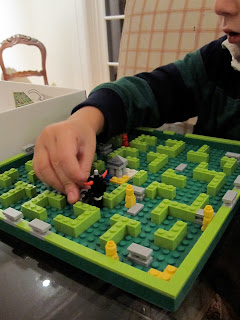 The game is built around a very simple mechanic, but delivers some fairly complex tactical choices for each player. I have found it fun to play and it seems to offer each player tactical options with each die roll....great for developing the little guy's strategic mind....and not so boring that dad can't get in to it as well! 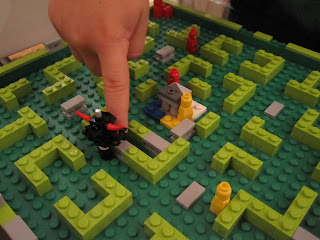 Basically each player has three warriors that they have to move through the labyrinth, avoiding the Big Black Minotaur and get all three of the warriors to the center of the board  before their opponent to win. The game is based on a D6 with 1-4 being moves and 5 being the option to move a blocking (grey) piece to thwart either the opponents warriors or the Minotaur. On a 6 the player can move the Minotaur 8 spaces. If the Minotaur contacts a players man, he has to return it to the home corner and start again...the first player to get three warriors to the center square wins the game.  Super clean and simple but with a degree of tactical possibilities make it a "real" game IHMO. 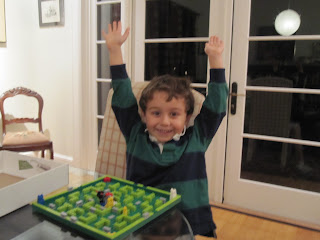 ...and of course my son seems to get the best of me nearly every time...a true gamer in the making! We use the Minotaurus game as the break from TV cartoons and computer games which seem generally to have little tactical or strategic subtlety. ...(and lack of course the dimension of having actual figures to move!)
Posted by littlejohn at 6:11 PM 5 comments:

Labels: It's All Good

More Pics To Open the Ball 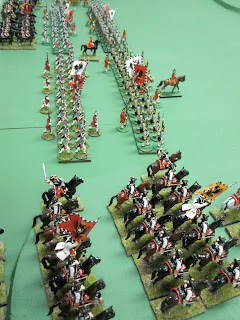 A few more pics before the first bass notes of cannon open the Ball...

Hopefully the "the Dogs of War" will be loosed in the next couple of days and a battle report will soon  follow. Thanks to everyone for tuning in!
Posted by littlejohn at 6:27 PM 6 comments:

The Cure: The Splendors of 18th Century Classic Wargaming!

In the face of a recent lull in operations...I figured the best way to banish the malaise was to return to the essentials....classic 18th century gaming! I resolved to reconfigure my table sections in order to build the largest table I could construct with the table sections I have on hand expanding the "Green Mile"  to a 4x10' table and to deploy ALL of my 18th century collection! That meant that the intrepid forces of the Konigreich der Bleiherzen and the Grand Duchess' infamous Grolsteiners were in due course arrayed across 4 feet of soon to be contested European countryside. 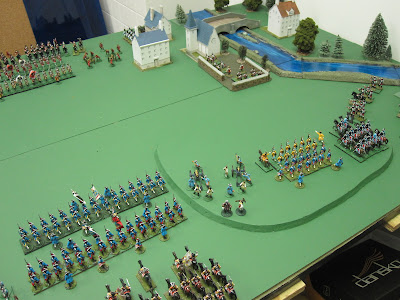 Just laying everything out consumed a pleasurable afternoon and I could feel the old magic seeping back into my gaming starved brain.

After all, these guys are what really ramped up my gaming not to mention my blogging two years ago now, and they deserve to get some table time. 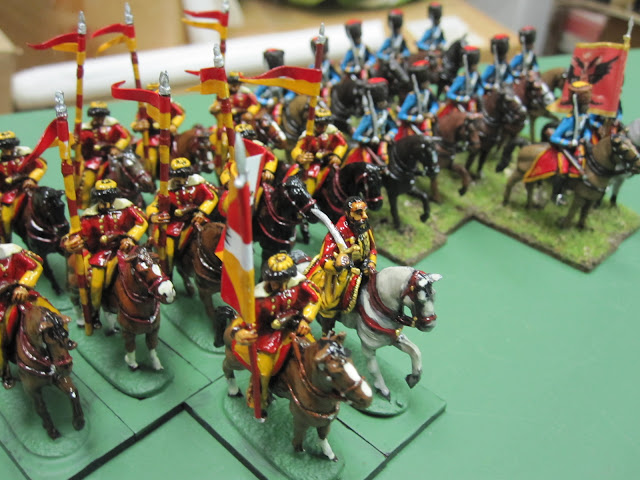 Still deciding on what rules (my usual Grant or perhaps another go with Black Powder...or maybe some others...) to use for this battle...but it's shaping up to be a big one regardless.....More pics of this upcoming battle in the next post.

(....having a bit of trouble with blogger getting pics to be clickable....so some work and some don't...)
Posted by littlejohn at 5:09 PM 15 comments: 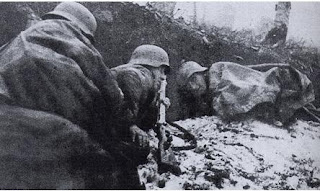 It's been almost a month since any posts here at the Lead Gardens and I think I'm having to admit to being "pinned down" by real life. It seems I've also hit the painting wall and have not picked up a brush in earnest for a good while now. I think we all get to this place at some point in our hobby, and it's not much fun, but hopefully the barrage will end and the troops can get moving again.

Or maybe I should just call in the big guns... 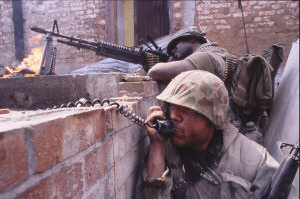