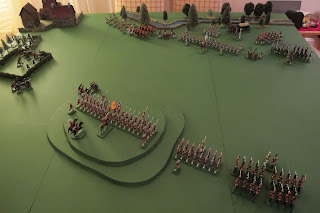 A Saturday afternoon here at the Lead gardens found me taking over the dining table for a weekend 40mm battle with the some newly finished units added to the collection. 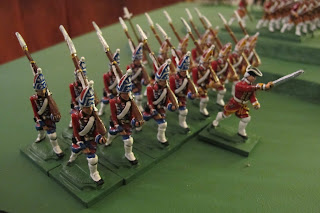 First is a second 8 figure grenadier company on the British side representing the grenadier company of the 23rd Royal Fusiliers. These fellows will form a composite grenadier unit of 16 men plus officers with the grenadiers of the 12th foot. My plans are to do the complete 23rd in a few weeks if I can find the time to cast them up.
I also have two new 6lbr guns battalion guns painted up for each side, plus a light infantry unit for the French. 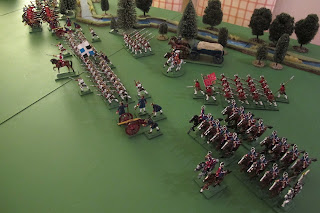 In the overview pic at the top of the page, you can see the initial positions of the game. The French are attempting to force their way into a small village (top left of the pic) and are confronted by a British blocking force on some high ground overlooking their route of march. This battle is based on a historical English Civil War battle,  (I have unfortunately forgot the name but I will post if I can come up with it.) 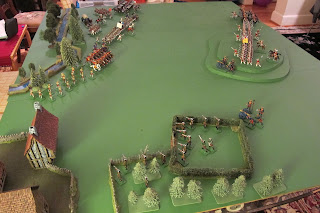 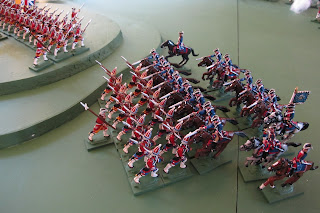 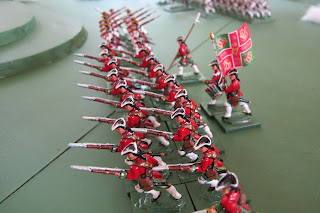 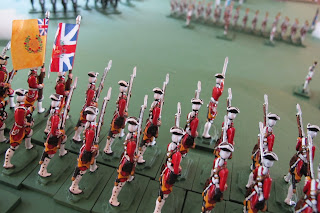 Unfortunately after this turn of the game,...(it had slowly gone on for a day and a half...(my being busy with other weekend tasks...)...my dear wife dropped the "Is this stuff going to be here on the dining table permanently?"  Well at that moment I was really missing my normal back room gaming space. So I gave in and returned the dining table to it's "normal" function with the game unfinished. I'll have to give it another go at a future date
Posted by littlejohn at 5:18 AM 10 comments: