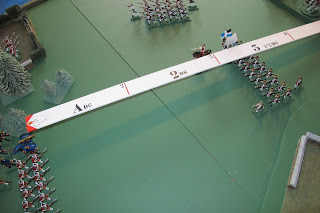 Working as I do in a school of architecture here in Virginia has its perks especially at the end of the term when students pack up their studio stuff to head home. It's usually a good time to check the recycling bins for useable materials that can be re-purposed for gaming. This past summer term found me in the possession of several nice 48" wood strips leftover from a shop project. I made off with them and did a bit of painting and lettering on one of them to make a pretty serviceable artillery stick for "Charge" at 2/3s scale.
I had some stencil templates to do the lettering and a coat of white artist gesso did good service as a basecoat. I did two coats with a light sanding between coats to make a nice smooth surface, though if you were in a hurry, the gesso covers in one coat. (the stencils are a hard-to-get metal reproduction of the classic set used by the famed architect Le Corbusier back in the 1920s...so they look pretty good and have a "workmanlike" look... but I think one could get just as nice an effect with an inexpensive paper stencil of the right size). The artillery batten is about an inch and a half wide so it works great to also indicate roughly any blocking of the field of fire by intervening friendlies.

I'm also thinking of doing some tweaking of the melee rules to take into account some things like grenadiers, light cavalry and lancers...that would have some advantage in the melee rolls but not as dramatic as the doubling of the D6 in the cavalry versus infantry melee situation.

I'm enjoying the 2/3s scale version of the rules (many thanks to Ross for the suggestion) and it works with my table depth very well.
Posted by littlejohn at 9:58 PM 3 comments:

The battle opens with the British advancing smartly in column of companies to cover the expanse of open ground as quickly as possible. 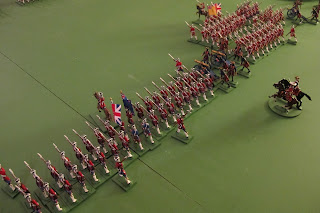 The 8th Regiment of Foot (King's) deployed in line covers the flank of the assaulting column. 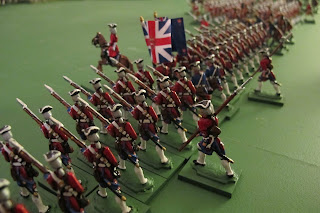 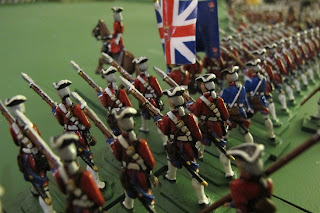 British battalion guns do some serious damage to an exposed company of the Lyonnais Regiment. 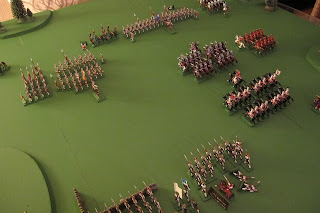 I simulated indecision on the part of the French of when to release their cavalry by rolling each turn for their Brigadier to convince the reluctant CinC to charge forward. About turn three they finally surge forward.


In the center the French cavalry charge the 8th regiment of foot... 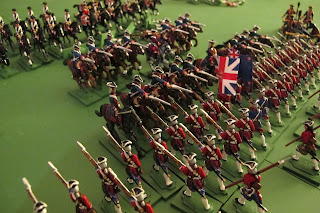 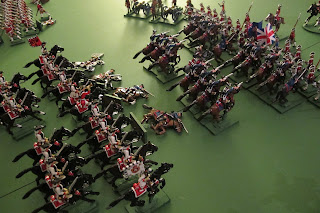 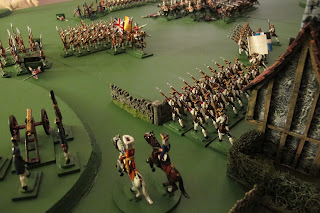 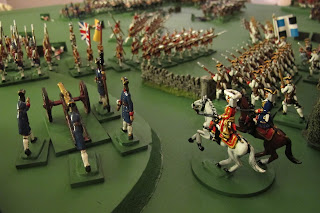 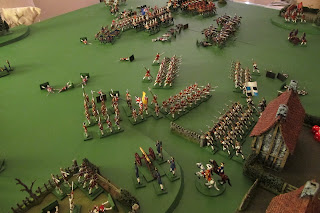 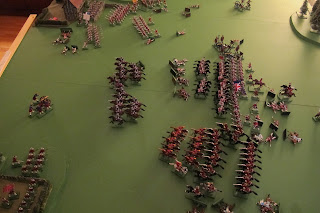 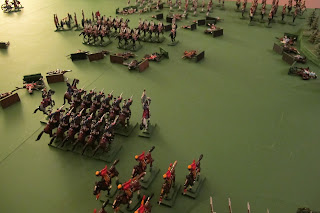 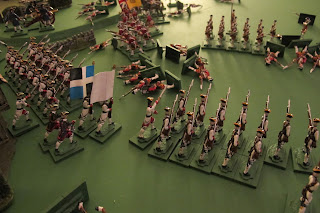 This battle was fun...but had to be taken down fast.... but my sights were set on getting a larger table set up and some more figures painted up...so in my next post, another CS Grant teaser from the "Raid on St. Michel" book
Posted by littlejohn at 12:54 PM 8 comments:

Return of "The Green Mile"! 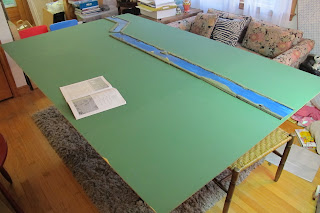 It was bellwether day here at the Lead Gardens as I was granted an official letter of tolerance from the Grand Duchess to use our rarely used but much cluttered guest room as a place to set up a more permanent (...ok, "semi" permanent...) gaming table so I don't have to disrupt dining and homework operations on our family table any longer (and not have to travel to her store across town to use the back storage room). And to make it even sweeter, I now have a room with a door!...an all important feature now that we have a new and remarkably destructive rascal of a Siamese kitten in the household.

I have, in the past, been known to make a merry joke at my lovely wife's expense but this gift of space has made me a true believer in her ongoing benevolence.

So after a day of cleaning, I was able to set up the entire expanse of my "Green Mile" in all it's 8' x 5' of classic wargaming glory! This very hour I am setting up another scenario from C. Grant's "Raid on St. Michel (I do have the re-fight of the Battle of St. Michel promised last post already finished up too, but it will take a day or so to get it written up.)

Labels: Classic Wargaming, It's All Good, Old School, The Table 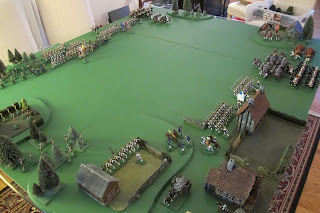 The British, after a failed first attempt at capturing St. Michel, have, by some timely reinforcements (read frantic week of casting and painting...) returned to the attack and are making a second attempt to capture the all important pay wagons of the French forces in the area.

The newest addition to the British is the 8th regiment of Foot (Kings). I struggled to get the right shade of blue for the facing but I'm still not quite happy with how they turned out. Dark royal blue is a seemingly hard color to get right and I've not yet figured out the right solution (or brand of paint) to get it right...any suggestions are much appreciated!


I'll be fighting this one out over the next couple of days...despite my occupation of the family dining table, I intend to finish this one and do a proper battle report.

I also spent the day cleaning a "spare" room in our house that, if plans go well, will become a new gaming space--though not quite entirely dedicated to gaming....at least a bit less disruptive to the household...and less accessible to the new kitten who has shown great and destructive interest in the goings on in the dining room!

I think the British now have a fighting chance at taking the town...and I have new impetus in adding another two feet to the 6x5 table I'm currently limited to...but mum's the word... don't tell the Misses!

I'm also in heated anticipation of the new Prince August "Karoliner" molds coming out in a few weeks...they look really good and a nice addition for us PA fans who are using the figures for wargaming! If we could just convince them to make a grenadier in a bearskin hat....
Posted by littlejohn at 5:25 PM 5 comments: