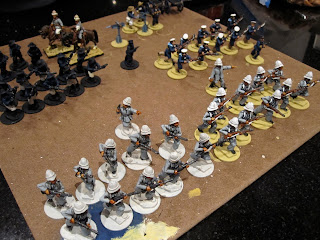 After a busy November of traveling and family get togethers, I'm finally getting quieted down enough to contemplate finishing a British landing party for my Sudan collection. These fellows have been in progress for a few months now and its time to get them loaded on to my Nile gunboats (to appear in the next post). I'm using a 10-12 figure per company organization so the force seen here on the tray are 2 companies of Royal Marines and 2 companies of Naval Brigade "bluejackets" two bluejacket gun crews with 2 deck mounted Maxims and 2 Nordenfelt MGs all in various stages of near completion. I'm planning on leaving the bases plain tan so they match the gunboat decks as well as blend in reasonably well with the desert surface of my table. Along with these I'm painting up 2 mounted British Colonels to command the Brits in battle. All these figures are Old Glory 25/28mm. The Marines in grey are converted Spanish colonial regulars from Old Glory as well...they work well for units in long pants (like the Rifle Brigade and Royal Marines in the Sudan) 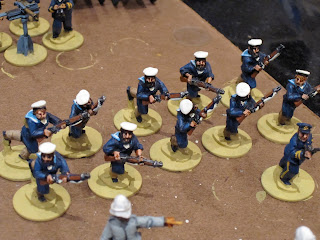 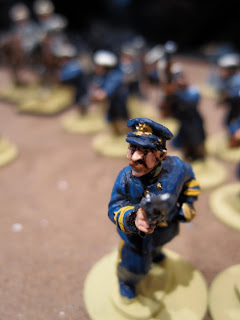 I think I'm going to have to name this stout fellow Sgt. Pepper....or maybe Ringo! 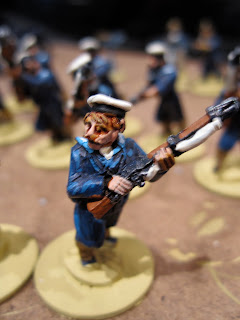 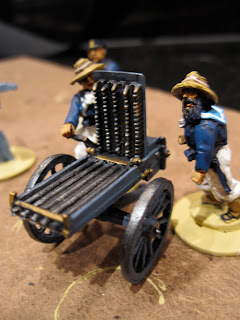 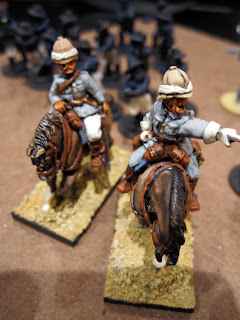 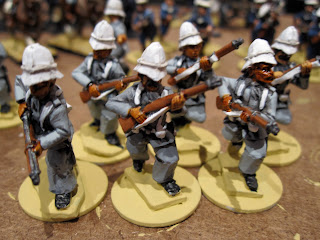 Royal Marines (faces yet to be completed) 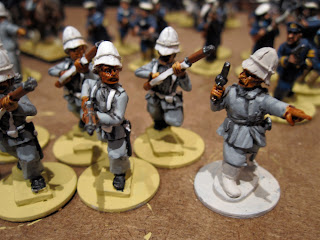 I'm hoping to complete these all in the next few days and have a colonial game up and running before Christmas.
Posted by littlejohn at 7:46 AM 3 comments:

Back from my trip to Italy... and still trying to grasp the enormity of the experience. Got to see plenty of old city fortifications like this 4 pointed fort near Siena. The fort is called the Citadel of Santa Barbera.

overview of the fort

The fort is in great condition and dates from 1560. It was designed by a fellow named Baldasarre Lanci and as I have since found out, the Italians were the inventors of the bastioned fort...a bit of fact that I had never had occasion to ponder. I suppose all those struggles between cities in the Italian Wars, and the invasion of Charles VIII of France, (who came equipped with a powerful mobile siege train), combined with a density of architectural and engineering genius present in the days of the early renaissance made it a hotbed of advanced military ideas as well.

Here is a desperate 'forlorn hope' huddled against the base of the rampart wall...actually our group of architecture students waiting for the bus.

In the distance you can just make out the shoulder of one of the bastions and the flanking gun positions that were designed to keep the base of the wall swept with enfilading fire.

a shoulder of the bastion

the double flank of the bastion...this doubling of the flank was typical of the old Italian manner of fortifications

looking straight in to the center of the rampart wall...

I'm not sure about the gate, I'm guessing it was a later addition or perhaps it was a sally port. There were a couple of these small gates built also in to the bottom of the bastion flanks.

rounded point of a bastion...this rounding was typical of early Italian fortifications and is capped at the base of the wall with an angled point making the base of the point more difficult to breach with cannons

The bus driver we awaited turned out to be a pretty gruff fellow and I couldn't resist taking a pic of his "warning" to unruly passengers hung on his rear view mirror...you can see him in the reflection... beware all yee who enter! ;)

In Rome I saw a nice toy soldier shop with this cool display of plastic Romans in testudo formation in its window. These guys were (I think) 90mm figures. The stuff inside was definitely for collectors and very expensive given my US dollars not spreading very far in Euros...but fun to see!