Irons in the Fire

My Christmas shopping is more or less done and since I am Chief Cook for Christmas dinner I'm planning a serious dinner for one and all! So some slowdown in painting is to be expected...Though I did get a basic flag designed for the Grolstien forces soon to be rolled out with the Duchess' premier unit of curassiers....(2 squadrons mind you! and in her favorite colors of Carmine no less...) ....She is quite the demanding monarch!
Posted by littlejohn at 1:17 PM 7 comments:

I'm starting two new blogs today to bring my ImagiNations into being. Please see my Link list for directions.

Many thanks to Jeff and Jean-Louis and everyone on the Emperor and Elector blog for putting the "bug in my ear"...like going down the rabbit hole...but then again, "Alice" was always my favorite story!...the dark side indeed!

Though I must now be sometimes known as Monsieur Michel Dugas, Military Cartographer and Visiting Minister of War and Culture, to the Court of the Königreich der Bleiherzen!
Posted by littlejohn at 6:57 PM 3 comments: 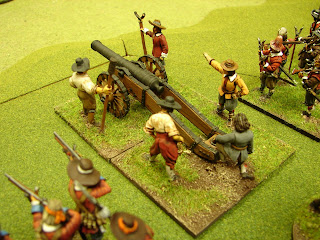 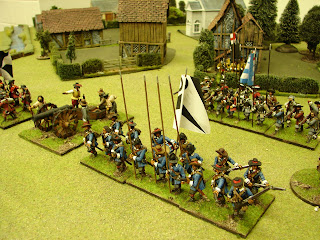 Just a few images this post to let everyone see what I'm up to these last couple of weeks...
I finished 2 ECW artillery guns and crews and here they are on the table. 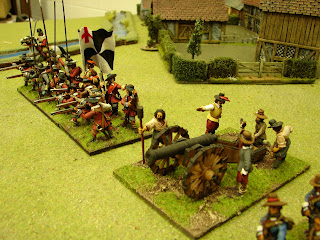 I had a "winter review" of my 7YW Prussians on the "Speistitschtraße" (the dining table...) to parade my just finished Kurassier Regiment 2 with the rest of the army and just to get myself in the mood to do some more painting...and some thinking on my fictitious nations). 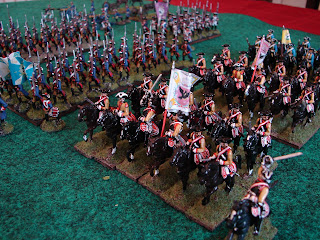 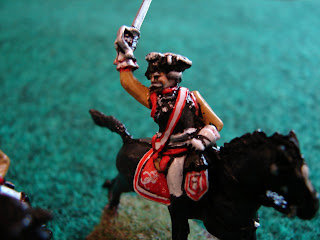 And finally I've been toying with names, personalities and flags for my new nations...

Below is a preliminary idea for a typical Liebfannen of the infantry regiments of the Königreich der Bleiherzen (or, The Kingdom of Lead Hearts)
or known by its people as Bleiherzland. I'm still lacking a motto but perhaps our agents in MonteCristo can help with that. 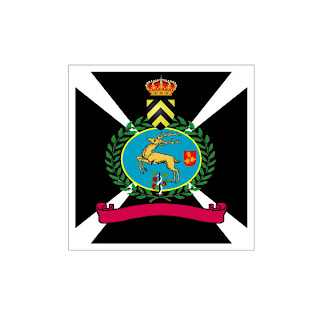 The Bleiherzlanders are folk to whom hunting, woodsmanship, and winemaking are high on the list of life's pleasures and only of late have been swept up in the turmoil of the Seven Years War recently declaring an alliance with Prussia. The formidable Duchess of Grolstein, herself a willing participant in Maria Teresa's vendetta against Frederick's Prussia has of late turned her agressive attentions on Bleiherzland if not to prove her mettle against a weaker ally of Prussia then certainly to conquer a country of seasoned young men who (being in general superb marksmen), might well serve to build up her armies for further adventures in support of the Austrians.

Since the Bleiherzland armies are as yet so small, astute correspondents expect the Bleiherzlanders to initially rely on the newest kleinkrieg methods of warfare (one of their finest young officers, a certain Goetzpeter Gerlach, recently survived a battle in America as an observer on the staff of that unfortunate Englishman, General Braddock) to take full advantage of the more forested countryside of their beloved country.
Posted by littlejohn at 3:02 PM 6 comments: 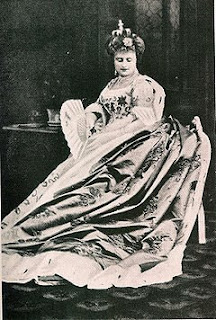 Could this formidable creature be the Monarch of the world's newest ImagiNation...she certainly seems bellicose enough.... and her appetite for soldiers....mon dieu!...and what unfortunate state is fated to be the target of her attentions! Who knows...perhaps news from our agents before the month is out?
Posted by littlejohn at 9:49 PM 2 comments: 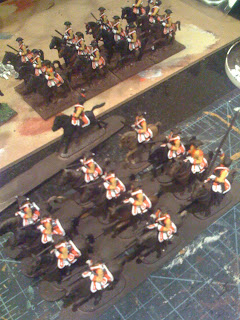 I've been wrapping up my classes and grading this week so not much time for painting. But I have been using the evenings to catch up on all the great blogs I have been following...and have added a couple of interesting new ones today. I'm taking a short break from ECW (The Project) to finish 2 squadrons of Prussian SYW Cuirassiers that I've left unfinished waiting for the inspiration to complete. I have to thank all my blogger friends who are building those wonderful "imagiNations" for getting me to finish these guys...I'm sitting on piles of unpainted RSM figures that I think will become the first units of my own pair of (continually warring) imagiNations so this holiday season will be a great time to jump start that project.
Posted by littlejohn at 3:54 PM 5 comments: 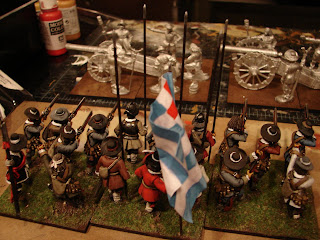 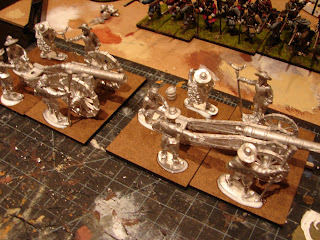 I was able, despite a busy week, to get in a bit of painting on The Project so I'm pretty happy. The newest unit of foot represents perhaps a typical local garrison unit and is painted in a more motley color scheme. I didn't model it after any specific historical unit so it will be able to serve on either the Royalist or Parliamentarian side in a given battle depending on the needs of the scenario. I used a colorful flag to give the unit a visual appeal despite the mostly grey/brown/off white scheme of the coats. 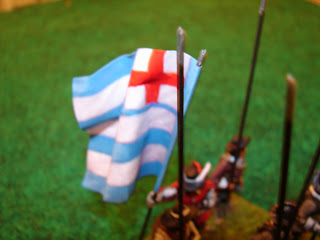 The flag would be reminiscent of a thirty years war flag and some ECW flags had horizontal stripes...so I used it to give the "switch" unit some visual punch with the rationale that they might use whatever flag was at hand. I've had good success with just printing out my flags on my HP inkjet and then once they are on the staff (I use UHU glue) I fold them...let dry till they stiffen...then I come back carefully and paint over the printed colors for a bit more intense opaque quality. I've used the flags available on the Quindia site as well as some I've drawn digitally myself. I then lighten the base colors and highlight the outer curves...and I think its a pretty good look, though The League of Augsburg website has some REALLY beautiful flag work done on linen flag material. I've yet to try that but its definitely on my "to do" list.

Also, to my great pleasure, got an order in from Sash and Saber (quickly shipped I might add..) of two guns and crews that will also serve in a "switch hitting" role for either side when they are needed. The S&S guns and crews are really nice and I'm looking forward to adding them to forces. I've got enough figures to make about two more foot units and perhaps another dragoon unit then I will have to figure out what's next! I'm thinking a couple more horse units for each side. Since the Royalists in both of the last two battles have routed the Roundhead horse pretty easily I think Parliament will get the lions share of the new levy.