A trip to visit my family and in particular my father who has been experiencing some ill health lately (fortunately he is doing much better), led me to the far reaches of south Louisiana last week. Though the trip took me off the gaming map for a while, the seafood was superb and in addition to gaining a few pounds on my mothers authentic cajun food, I did manage to find a few more boxes to complete the desert fort I started in the last post. I'll be working on that in the coming weeks. I also found a couple of nice wooden boats that when converted will be just right to make a few more dhows to complement the Mahdi's navy. With teaching and fall semester looming next week, I'll have to be more careful with time but of course there's always room for gaming!

in the meantime here are the parts of the fort that I had completed in the last post in action. 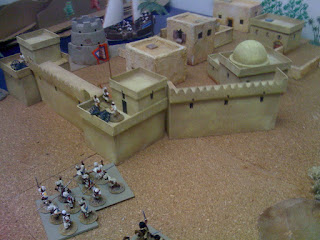 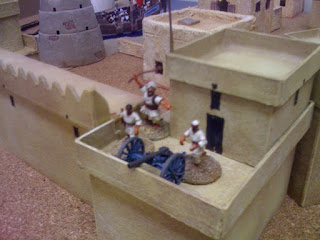 Though my collection is 25/28mm Old Glory, these 20mm Ral Parthas work well for mahdist artillery because their smaller size fit the ramparts well...as long as I don't put them right up next to the OG figures they look ok. The 2 crew are painted as captured Egyptians...the guy with the whip keeping them to their work at their guns is an Old Glory leader figure. He's a bit bigger so he looks suitably tough.)

So then more to come soon ...gunboats, forts, and the Naval Brigade next.
Posted by littlejohn at 7:23 PM 3 comments:

Out of the Box 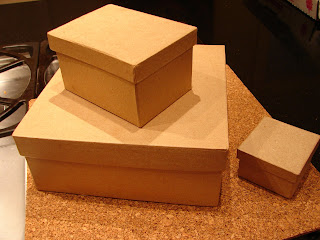 More advances on the cardboard box building front. I bought a few more cheap craft boxes of different sizes and spent the evening puzzling out how to make the components of a credible desert fort. The challenge was to cut the boxes in such a way as to preserve the structural strength of the thin cardboard box while cutting away enough to make the parts I wanted....a bit of a geometric puzzle, but nothing too complicated... just a bit of fitting and trimming to get the parts to butt together. Again, as in the method I described in the last post to make the simple desert houses, the essential "move" is to flip the box lid over and glue it to the box bottom make the parapet/roof. 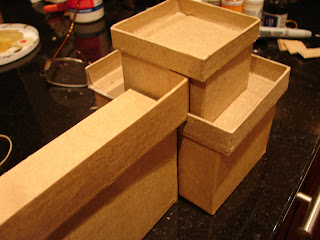 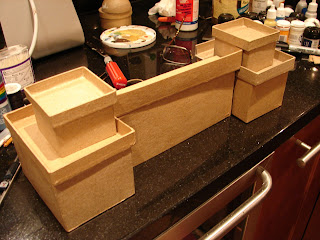 I live in a small town and the local craft store only had a few sizes of boxes available so the corner towers had to be made with two smaller boxes stacked. But I may take a little drive today to the larger store (45 minutes away) where there is a bigger selection of shapes and sizes...again all just a dollar or two each! (Though the fuel used to make the drive will cut into the "frugality margin" of the project).

Still a work in progress but I painted the sections I had and so far, I think the result is promising. 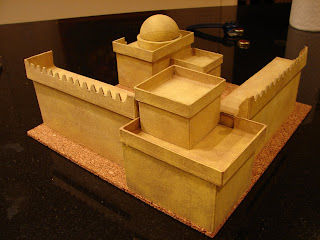 Half a fort, and still only 10 dollars spent 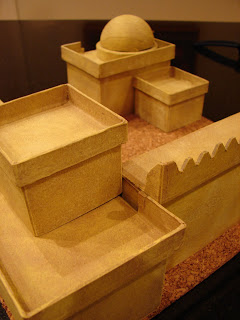 I also found a sphere made of the same material as the boxes (or so I thought, ...it turned out to have a soft plastic inner lining, but still easy to cut.) so the dome was a nice addition. 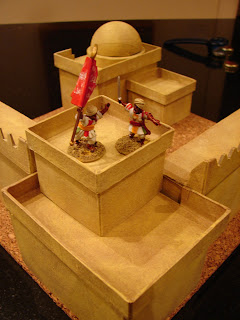 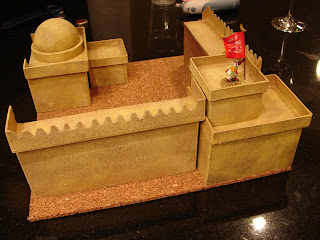 I used a wire nipper to cut the crenellation along the top of the large walls. Since the cardboard is thin this job goes fast. The thin appearance of the parapets is something that I'll have to overlook for the sake of an inexpensive project. Though they could be backed with another layer to thicken them up, for this first go I wanted to keep it extremely simple. In other words, whenever the urge to complicate things crops up, step away from the project and have another Bass until the feeling passes! 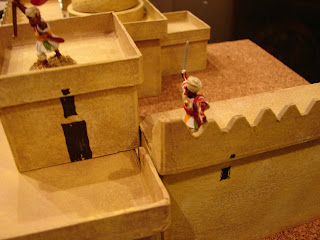 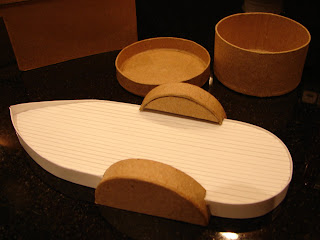 I'm sure someone somewhere probably already thought of this idea but I'm planting my flag in it nonetheless!...because, it's new to me! ;)... I saw a nice idea for using inexpensive cardboard pre-made boxes commonly found in craft stores here in the US for making the half circular paddle wheel housings found on the side of Nile gunboats over at the Wasatch Front Gaming Society Page. In the process of searching out the right shape I was standing in the store playing with the other boxes available and it hit me that the rectangular boxes would possibly make decent desert buildings...and they were only about a dollar per box!!. 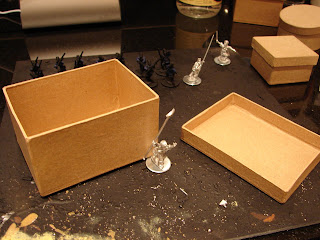 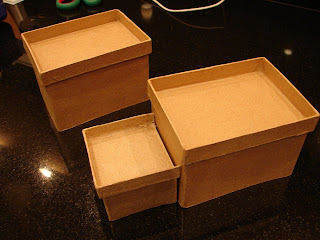 So I stood there with the box bottom and the box lid and did a simple flip of the lid...and wow a pretty decent beginning of a desert building with a parapet just the right size for 25mm figures! So in addition to buying the circular shaped box to make another Nile steamer, I bought a couple of the rectangluar boxes in different sizes and headed home to do some modeling.

The boxes are basically grey fiberboard covered with a brown "craft" or mailing paper that is a nice shade of brown that makes a good base color without having to prime the surface. The boxes cut really easily and thus surgery to make things fit is a snap. On the prototype buildings you see in the pics I used two sizes one large and one small. I simply flipped the top of the box over and glued it to the bottom of the box, flipped the whole thing over and...well...it's finished... ready for painting!?

OK I know it sounds too easy but all I had to do was drybrush the surface with a light sand yellow. The surface of the boxes are just a bit bit rough and take drybrush perfectly. Then all that remained to was to draw in some details with a "Sharpie" marker pen (using a thin and a thick one as per my "old school method" described in an earlier post). To do the buildings up just a bit more I added an ink washed stripe along the bottom of the building (I've seen this done on some traditional buildings in Africa), it helps to give the building some color and detail. The parapet is also ripe for detailing with decorated corners and such, but for this first prototype I just left things simple. 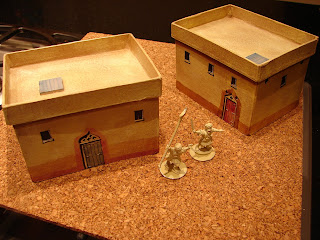 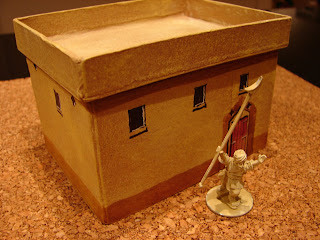 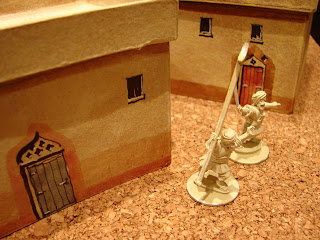 On the roof I glued a square of basswood (scribed to look like a wooden roof "hatch") to detail the roof...and its done! The whole process took about 15 minutes and cost a dollar and some change. (Holy smokes! At this rate I'll have Khartoum in a few days!). 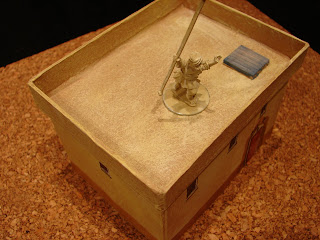 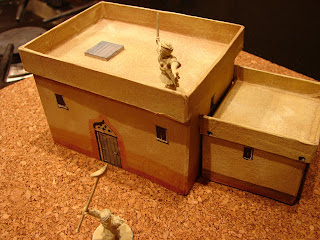 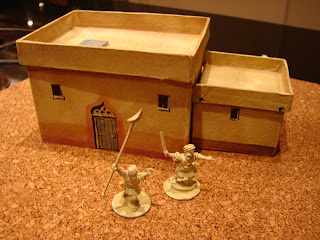 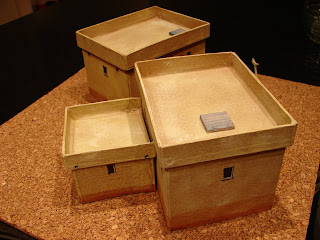 To get further versatility I cut the "parapet" on the smaller box to make a small wing that can be attached to the larger buildings to make variations...and...ok, this is really fun! 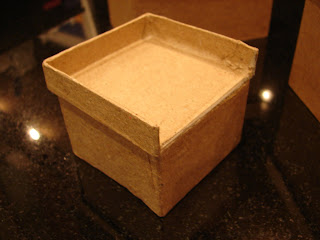 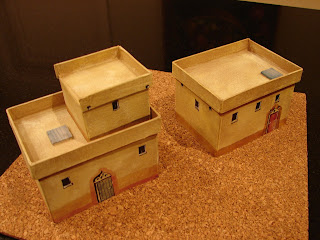 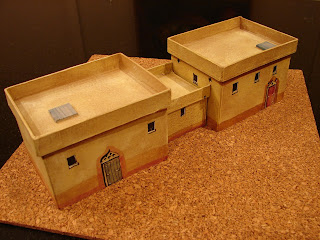 and with the right surgery, perhaps a fortified city wall...
Next I'm going to try modifying the boxes to make fortified walls, gates and such...so more to come! 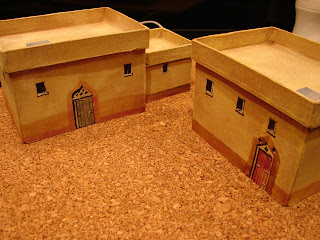