Thought I'd post a few diagrams of how I organize my troops for "Charge". Since the 40mm figures are so large I opt for a two "company" Regiment instead of the three shown in the rules. Also I call 8 figures a company so that makes my units 4 companies plus a company of grenadiers. I used the paper figures downloads from the "Junior General" website for the diagrams. 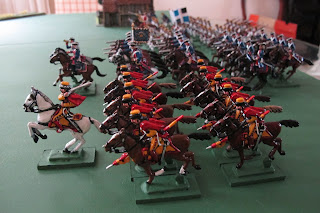 This weekend saw the most gaming here at the Lead Gardens in a very long time. The wife seemed to tolerate the occupation of the dining table reasonably well for the entire weekend, (of course I sent her off with her girlfriends on Saturday night so it was clear sailing to set up another go on the Battle of Blasthof this time with the sides entering on the short sides of the 4'x5' table (see last post for the first battle) 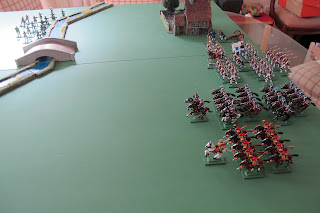 The French enter with their right flank passing Blasthof Farm which has been moved a little for this game to open the field a bit. Again I staged the entry of the infantry with random die rolls to activate units on the start line. 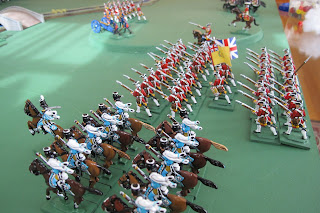 Also the British were given initial possession of Blasthof Bridge and a gun and the grenadiers of the 12th and Colonel Gerlach's Jagers tasked to hold it until reinforcements move up. 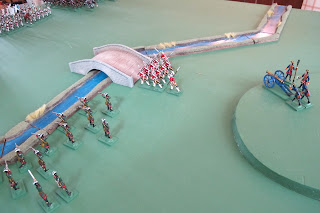 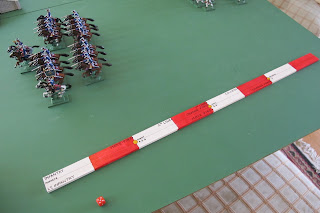 This game also featured my new custom made measuring batten for "Charge" with moves and firing distances all marked on it so I could do less rulebook checking during the game. 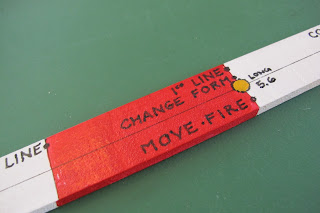 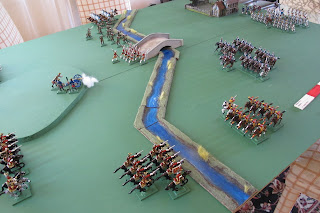 Initial move saw as in the last game cavalry getting activated first. In this game the river figures much more in the game as a barrier even though I made it fordable along its entire length. 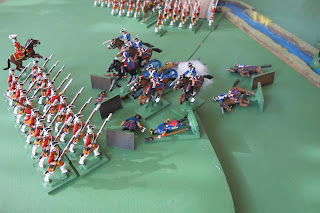 The French goaded into charging rather than suffer further casualties from long range artillery, charge across Blasthof stream and up the long slope of the Blashofberg taking heavy casualties from artillery and a final blast of canister but still manage to overrun the gun. 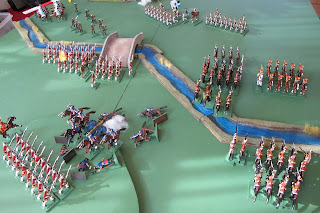 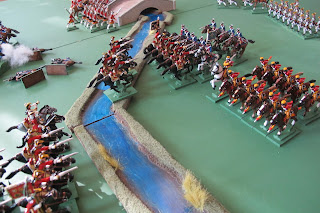 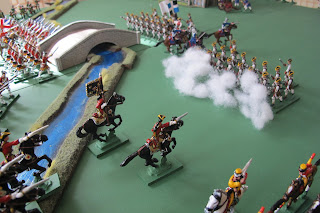 Unfortunately both the French squadron that captured the battery and the British face a turn of rally right in the teeth of full infantry volleys that cause heavy casualties. 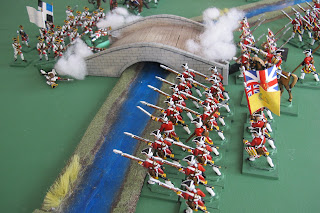 The infantry battlelines close on the bridge proper and volleys are traded. 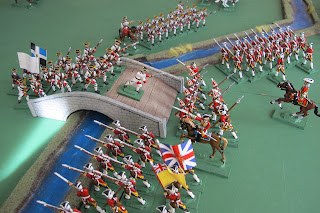 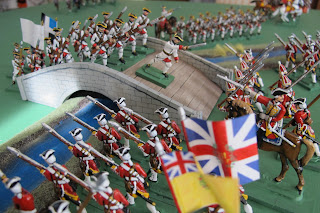 But bravely they form up and charge across... 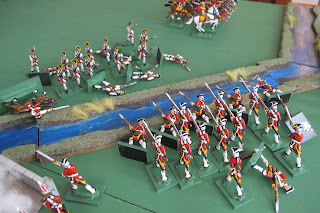 While their second company engage the British downstream. 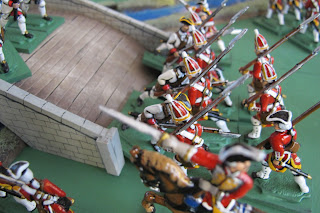 A few survivors make it across the bridge but are easily defeated by the grenadiers. 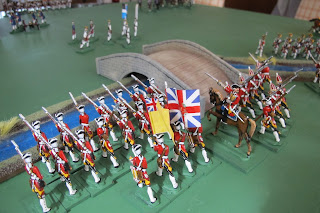 The French loose 50% in the assault and are forced to leave the field and loose the battle.

So in debriefing these two battles this weekend, I found "Charge" works really well at this scale, though on this small table I think I will next time use half scale distances. I might even use the elementary rules for a change of pace. The I-go U-go format of the elementary game might be easier for solo play.
I also realized that in these two battles I was calling the French regiment "Lyonaise",  but it actually painted as the Lorraine Regiment...my mistake...I'm getting old and my memory is like swiss cheese sometimes. But the commander the Marquis de Villaroy is the historical commander of the Lorraine Regiment. I plan to name all the major command figures in the collection after historical commanders ( something I could only do with the marvelous and indispensable "Project Seven Years War" website as well as the equally indispensable "Not By Appointment" that many of us Horse and Musket enthusiasts rely on...as always many thanks!)
Posted by littlejohn at 1:11 PM 8 comments:

Battle of Blasthof in 40mm 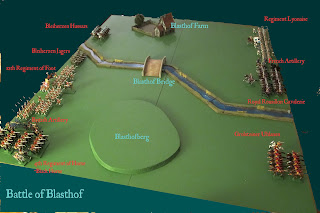 This weekend I carved out a bit of time to do a dining table re-fight of the classic Battle of Blasthof from Peter Young's "Charge". This time the thought was to do the battle using 40mm Prince August homecasts and playing the battle twice. Once across the short dimension of a small 4'x5' table and once across the long dimension using the same terrain set up. So what follows here is the battle set up according to "Charge" but with some variations in the forces and start positions. One of the things I wanted to experiment with was having big figures on a small table but still having enough room for some decent movement. The Charge rules were played essentially "as is" with the small addition of a save roll when officers are hit...not sure it makes much difference but I just thought there needed to be some sort of value in having all those splendid fellows on the table for something more than their visual pomp.

So here follows the account of the Battle of Blasthof (version 1):
The opening stages of the action are dominated by advancing cavalry on both sides. To make the small table "work" as a larger space, I staged the entry of the entry of the infantry using a D6 to randomize their entry turns, that way the cavalry had a large space to move in the early game. 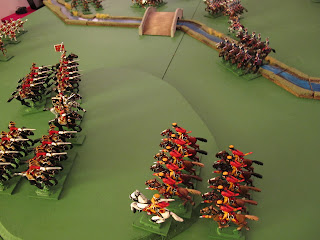 The initial cavalry clash on the Blasthofberg found the uhlanen particularly fierce in the initial round of melee. (Another house rule is I give lancers equal footing against heavy cavalry in the first round of melee...if a second round follows, they fight as an unequal combat versus the heavies.) 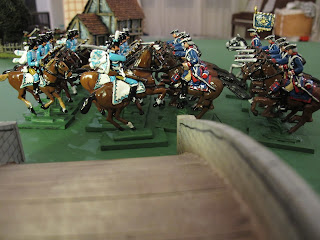 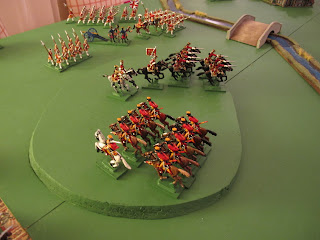 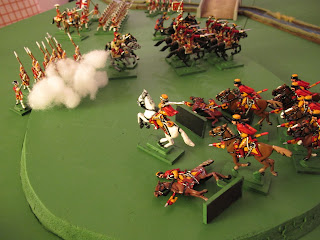 The Uhlanen manage to drive off one of the squadrons of the 4th but are caught by a timely volley by a the grenadier company of the 12th ordered to advance on the Blasthofberg and on the other flank both the hussars and the French withdraw and regroup.

The Regiment Lyonnais finally begins their advance and immediately begins to take casualties from both the British artillery and Colonel Gerlach's Jagers holding the farm. 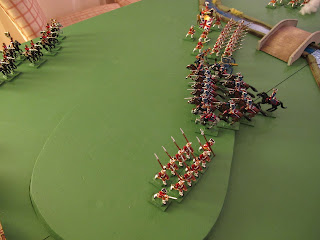 The second charge of the Royal Rousillion results in a huge hole punched in the British line and the final retreat of the 4th Horse. 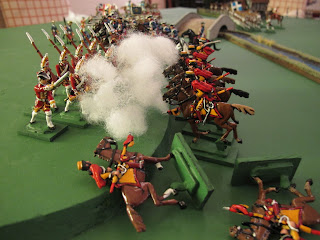 The Grolsteiner Uhlanen charge in support of the Royal Rousillion run into a volley from the British grenadiers that stops the charge dead in its tracks. 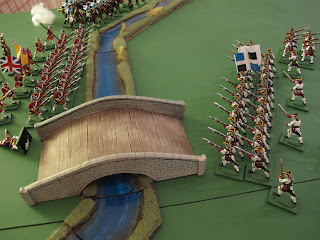 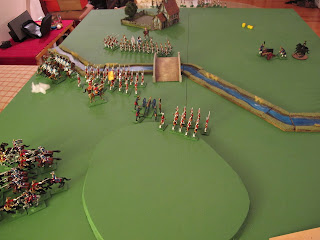 The British deliver a crushing volley that causes the Regiment Lyonnais to reach their breakpoint and ends the battle in the final hours of daylight. The British hold the field!...Can they be defeated in the next battle?