Battle in the Sudan: Relief of Atbara- Part 1 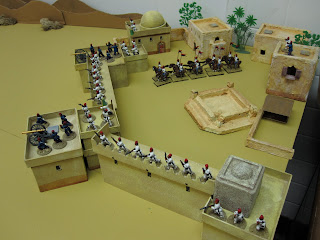 I've been playing a solo campaign for the past few months using Steve Winter's "Fire and Sword in the Sudan" campaign rules, and today's post is the beginning of a report of the first large battle in the campaign. Since I only started the collection at the beginning of last summer, it took a bit of painting and construction to get to a battle this size.

This battle will be the debut of the British gunboats and the Naval Brigade just recently completed. So here are some pics of the besieged fort at Atbara to start the report. (I'll be fighting this battle over a few days since we are snowed in here at Lead Gardens...and my gaming table is located across town... :0! This will also feature a fort largely constructed of cardboard boxes cleverly designed by the Egyptian engineer, Captain Mustafa Littlejohn (reportedly an orphan from Cairo who was adopted by an English Colonel and schooled in England in the finer points of military engineering on the cheap!) 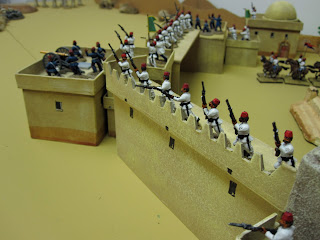 the garrison mans the walls 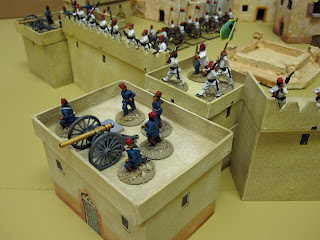 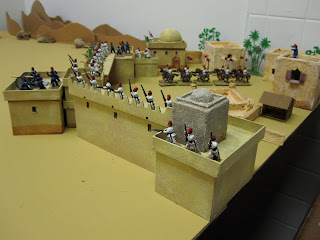 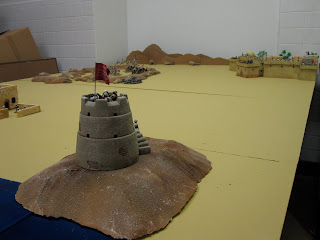 The fort is a few hundred yards from the bank of the Nile and the Mahdists have occupied an old defensive tower near the dock area. 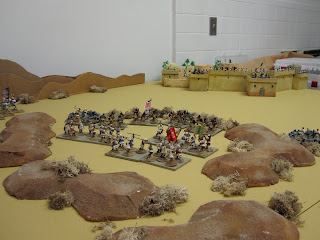 The Mahdist camp (the distance to the fort is "compressed" on the table so no firing between the fort and the camp is allowed in the game. 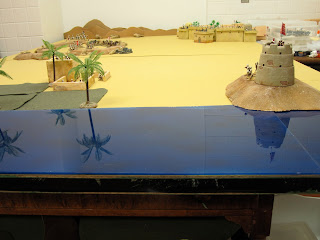 The landing area..(I have since added a dock to show in the next post) 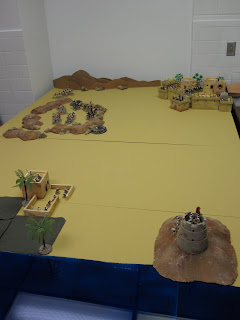 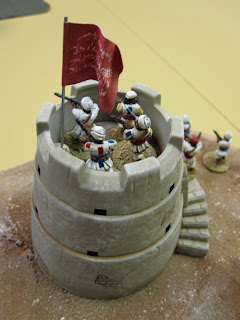 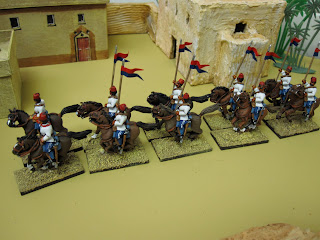 To Be Continued
Posted by littlejohn at 4:50 AM

Allow me to echo Mad Carew's comments. Everything looks great!

What rules are you planning on using? The Colonial period is one that keeps tempting me and tempting me . . . although more in India/Afghanistan than the Sudan.

It looks great indeed... the risk I run in reading a blog entry like this is that I get easily distracted from my current project (Napoleonic) and I fall prey of the temptation to go and take out of the closet my Sudan armies... thanks for the inspiration!

Jeff,
I usually use The Sword and the Flame but sometimes if I've got the urge I use Piquet (Field of Battle), but that only happens when I've got the time and energy to set up the armies. Piquet is a pretty interesting set of rules but the Army set up is for me (playing solo) a bit tedious.

I'm going to echo the previous comments - excellent pictures! I love the terrain and minis and am sorely tempted to do some Colonial gaming. Although, like Jeff, I lean more towards the India/Northwest frontier theatre (although French Foreign legion/North Africa also interests me, as does the Sudan and Zulu campaigns to some extent - so when I do it I'll likely mix in bits of some or all in a Colonial ImagiNations campaign).

Simple but really effective looking scenery. Splendid! looking forward to the next post!

Excellent - simply excellent.... was in Hobbycraft just yesterday afternoon, and almost, almost bought up a job lot of those cardboard boxes!!

Nice collection of colonials, the scenics look great; love the river. Looking forward to seeing the gunboat and landing party.