Conquering the Syracusans: One Little Guy At a Time 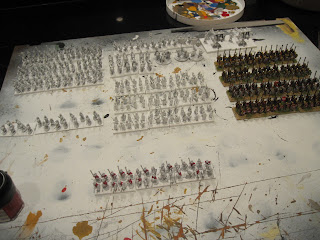 In progress...a 1000 point Syracusan army based for Warmaster Ancients
My 10mm ancients project is still chugging forward though it sometimes seems like I'm pushing behind the front rank of a hoplite "scrum", but still the units seem to get done eventually. With individually cast 10mm figures like Magister Militum, you spend a good bit of time cleaning and basing everything up. Regardless, they are really beautiful castings, but still require each base to be filed flat and just a few bits of flash trimmed off... so it makes the painting seem relatively easy by comparison. I was able to get the entire Syracuse army cleaned, primed and based today and I'm starting in on the first of 4 units of "peltasts" (actually more like light hoplites) and I have 4 units of heavy hoplites completed already. I did three units with shield blazons that were identical, but last night I got serious and did a unit of mercenaries with each figure carrying a different shield blazon. 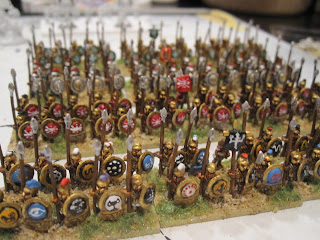 More Hoplites!
I'm priming everything white and then laying on the basic colors fairly roughly, coming back with an ink wash to cover the white spots and then finishing up with belts, highhlights and touch-ups...the entire process takes about a half-day for each 3 stand unit...not too bad. 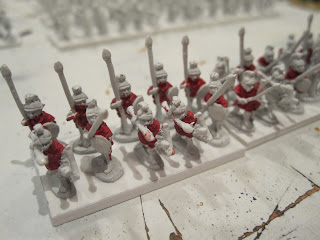 I'm hoping to have this army done by the end of the week? ...and maybe these guys can go up against my Republican Romans next weekend... by which time the "CinC Lead Gardens" will be back from a month in the Big Apple so she can take over with the little-ones (the non-metal ones...) and give me some much needed gaming time!
Posted by littlejohn at 4:09 PM 4 comments: 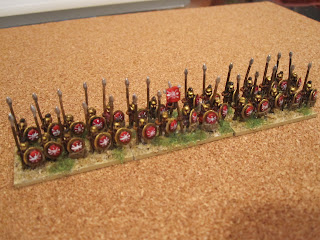 The Syracusan army grows...I got another 10mm unit painted up this afternoon. It's pretty amazing how fast this scale paints up when you are used to 25/28mm. I think 10mm stuff really needs the momentum that comes from doing one and then having the next based and primed ready to go. I think in a couple of days I should have the core of 4 hoplite units done and ready to move on to the light infantry. I usually save the cavalry and generals till last.

This latest unit represents a body of levy hoplites so they are  less well equipped with only a bronze helmet, greaves, and a bronze shield...no breastplate or such, so I just painted over the armor on the casting with the red color of the tunic...in the close up pics you can see the paint-over but on the table at this scale, hardly noticable... The shield blazon is derived from Syracusan coins of the period. 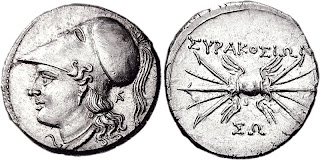 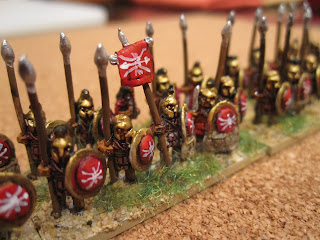 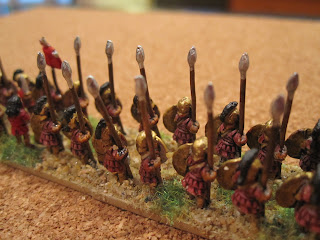 next up, a pair of regular hoplite units in bronze armor.
Posted by littlejohn at 5:35 PM 1 comment:

All Hail the Conquering Blackwash! 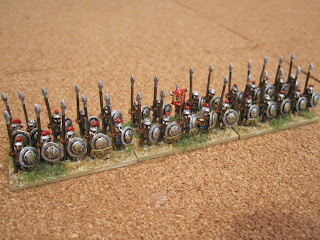 I'm finally getting back to a long dormant ancients project doing several armies for Warmaster Ancients in 10mm. Today I finished a unit of Syracusan Epilektoi hoplites. I found some nice info on hoplites that those of you paint ancients might have not yet run across. It's an extensive post on hoplites I found on a Forum called Totalwar.org the link to the post is here. This unit I've just finished represents a body of elite hoplites fielded by Syracuse. Apparently Syracuse was able to muster large numbers of hoplites but most were barely trained and armoured. Thus this unit will be the army's only strong body of spears. The other three yet to be painted will be a mix of levy and regular units. These guys are reported to have had iron gear as opposed to the older bronze. The rest of the Syracuse army will rounded out with light troops, a unit of cav, and some bolt throwers. 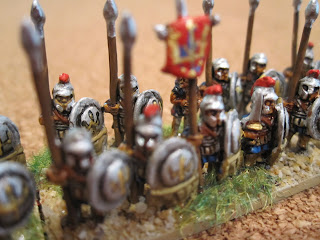 The whole collection of 10mm ancients (that I have stashed...all from Magister Militum) will be:

...and if I can still muster the patience, Spanish or Numidian. 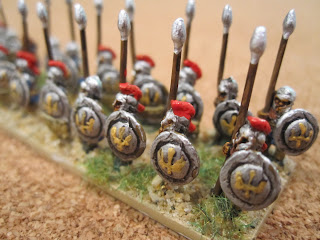 These 10mm guys do seem to take a bit of zen-like patience, not because they are all that hard to paint (...I can't really see them anyway...), but that there are so many of the little buggers...I went with a uniform shield design based on the website's info...though probably there would have been less uniformity...but at this scale I'm just not up to the task of individual shield devices yet...perhaps when I get to my greek mercenary hoplites in the Persian army, I'll step up and get serious. But in general at this scale "blackwash" seems to really do the job of hiding the mistakes and tying it all together. 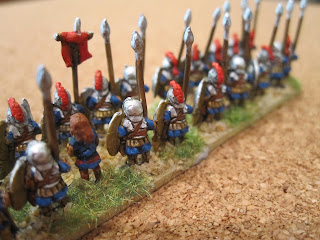 A Summer Saturday of Gaming 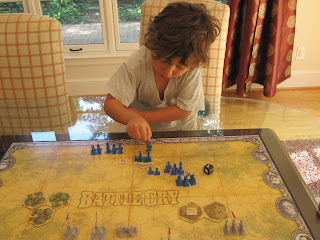 It's too hot to really go outside, I've got two kids to take care of, and the CinC Lead Gardens is away until the end of the month....so being left in "independent command", I find I'm on my own for the next couple of weeks with two kids to entertain! So....I pulled out my copy of Richard Borg's "Battle Cry" boardgame and laid it on the dining table and decided to let "nature take it's course"....

Predictably, my 5 year old noticed the game box immediately after waking up and wanted to set it up... So we set up his first "real" wargame! We used an interesting Battle Cry variant that was designed for kids that worked great for his first rule driven game. Basically the variant dispensed with the command cards and instead used a roll of the attack dice to determine the units you could move (1 die per general). 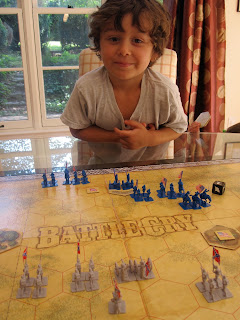 We had a great time with the game and I'm now really excited about my new opponent. I gave him two generals and I had one, (so he had a good chance of winning his first game) --which he did in fine style by capturing the high ground with his cav who proceeded to shoot up my counterattack with effective and rapid carbine fire.... and then following up with an infantry unit to seal my fate. 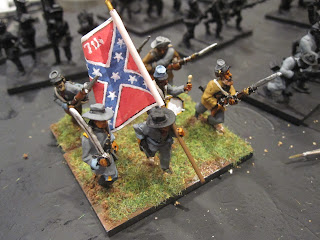 Later in the day, on the Battle Cry note, I decided to haul out a large batch of old 25mm ACW figures I had acquired on ebay a long while ago. I never could quite get up the enthusiasm to paint them up...but after this morning's game I thought they might make a good miniature version of the Battle Cry system. I used some pre-cut bases I already had to make units that had 4 stands for the infantry to match the boardgame's system of 4 infantry, 3 cav, and 2 artillery organization.  I had already based these guys according to Richard Borg's miniature version of the game so I painted up the first unit shown here in the pics. The unit is designed to fit well in a 4" hex on my table and still be designed to have 4 removable "steps" that correspond with the boardgame.


An infantry unit is mounted on 4 bases: one is a 60x40mm with 4 figures as the front rank, backed up by three 20x20mm bases with a single figure each, giving 4 total bases. This means that even with 3 casualties, the last base will always still look like a unit on the table even when it is nearly destroyed.

Here is a pic of the whole Confederate force: 10 units of infantry, 3 artillery, 2 cavalry plus a general. This is a bit shy of the original game (by one cav unit), but if this works I'll  have to acquire the cavalry to fill things out. 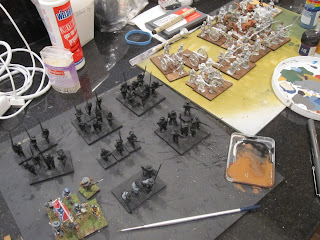 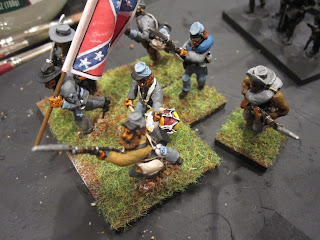 And here is a painted up unit... 4 men up front with three individually based in the second rank.

Though I'm a died in the wool miniatures man, the boardgaming world (particularly the Command and Colors system)  still offers some interesting gaming possibilities that are ripe for exploration.
Posted by littlejohn at 1:10 PM 7 comments: 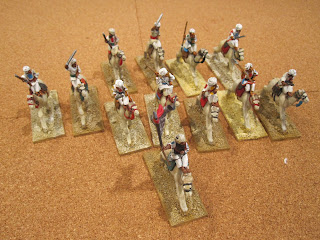 There's more "shelf clearing" going on here at the Lead Gardens since I'm trying to both trim down to a few core periods and to drum up some funds to flesh out those collections, so please check out my new ebay listings---here is an ebay link and just follow that page to the several auctions of my Sudan colonial stuff for sale. 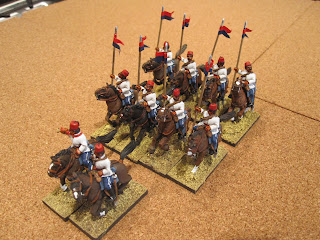 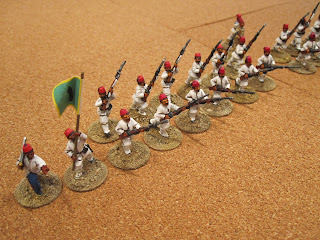 I'm basically selling off my 25mm Egyptians, Mahdist/Dervish, and Sudanese....and potentially I'll be posting some scratchbuilt gunboats and Naval brigade in a day or so...but I think I'll have to have a wine or two to ease the sting of parting with them!  In addition there will be 15mm FOW Italians and 1/72 Brit and German WWII vehicles and armor up for auction as soon as I get the pics taken tonight.

I'm still hoping to maintain some colonials in my collection but I think it will be the NW Frontier or some fictitious colonial world to allow for more varied kinds of battles.
Posted by littlejohn at 2:04 PM No comments: