The Crackle of Muskets! 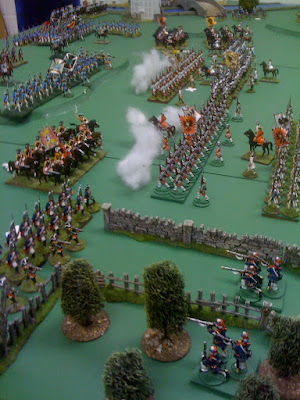 Men of Konggrattz face off with the Grand Duchess' finest...with some French mercenaries fielded by some fellow named Du Grassin in the right foreground skirmishing with Col. Gelach's valiant jagers... 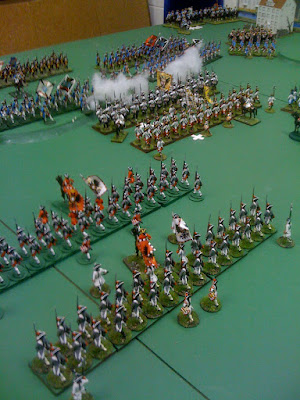 My interest in my 18th century ImagiNations continues with another battle using "Black Powder" rules. I'm still really enjoying the rules and learning the nuances of the system..(there is some real subtlety beneath the simple mechanics)...and it has really fired up my painting. I was able to "repurpose and repaint" several battalions of Prussians and Austrians to now be in the permanent service of The Grand Duchy of Grolstein and the Koniggratz der Bleiherzen. I'm hoping to parade both armies in their glory next week and post some pics of each.

And to make the game even sweeter...I just got my first battalion of Minden Miniatures in the mail!!! Beautiful castings and perfectly compatible with the bulk of my forces which are RSM castings. They are Hanoverian castings that will be painted to serve in the Grand Duchess' army as a premier unit of solid musketeers hailing from the Grand Duchess' home town. Here are a couple of pics of the raw castings. Service from Frank at Minden was nothing short of fantastic, and he was kind enough to toss in a drummer figure since I had forgotten to order one for the unit. Now that's a true wargamer! 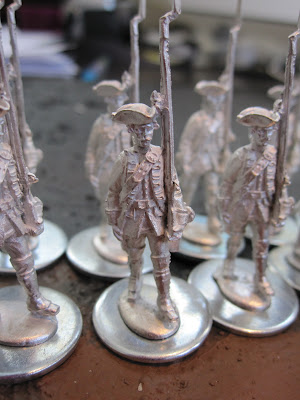 I'm a little late to the Minden party, but I was able to get some funds together and take the plunge. Since I'm across the pond the exchange rate hits me a bit hard but the 30 man (plus officers) unit cost 60 some-odd USD...not too bad for the level of detail and the overall quality which is a really nice balance between traditional proportionally correct sculpting and more more contemporary "chunky style" detailing. When I opened the box, my wife heard me exclaim, "oh...the creme de la creme!!" I can already tell these guys are going to paint up super well and I'm going to make a conscious effort to take my time to get them done right. I'll still be a die hard RSM guy for the bulk of my armies (since they cost about half and after all ...when it comes to the 18th century, I'm going to keep it classic "old school"..., but maybe for the "cool" units...its going to be Minden all the way. 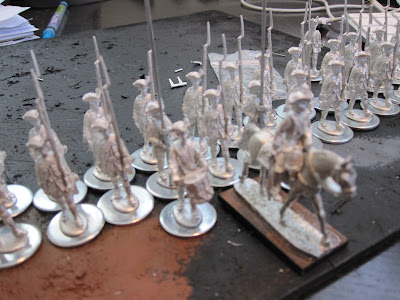 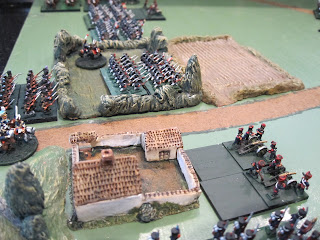 Sometimes a ruleset will reinvigorate my interest in a period. In this case Rick Priestly's Black Powder rules have got me going again both for my 18th century ImagiNation stuff and for Horse and Musket in general...I'll be posting a more detailed report of the rules but for now, suffice to say that I've been re-reading Charles S. Grant's "The War Game Companion", and his "Raid on St. Michel" campaign in addition to playing through the Black Powder rules using my 6mm Naps, some pictures of the games are shown here. 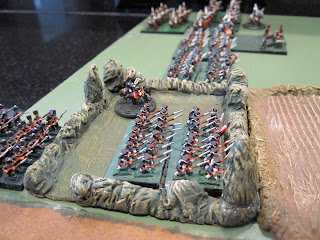 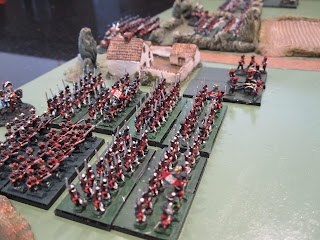 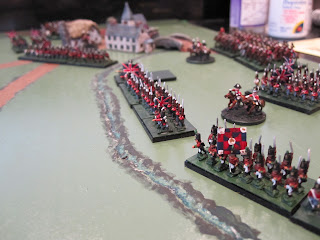 Brits and Portugese ready to resist the assault. ( all the figures are Adler 6mm) 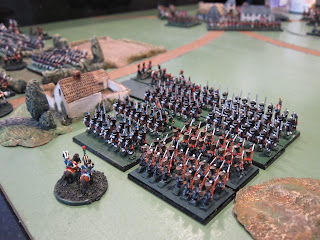 I played through a 6mm battle but realized that I was missing some critical elements in the rules, so I set up another game and things worked out much better. It always takes me a few plays through set of rules to get in to the finer points of play.

Playing these rules has also inspired me to finish a bunch of 25mm RSMs that I been sitting on waiting for inspiration...so now the 25s are finished and the ImagiNations game is back on!!!...more on that in the next post. Until then, here are images of my 6mm Adlers in action. 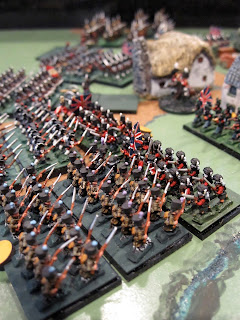 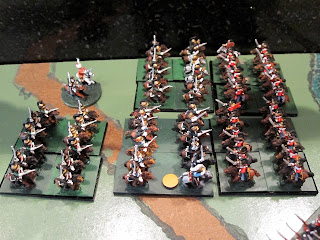 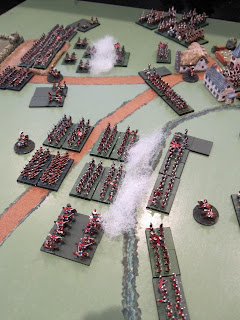 Overview of a 6mm battle...the table width is a mere 24" ...just enough to fit on my kitchen countertop 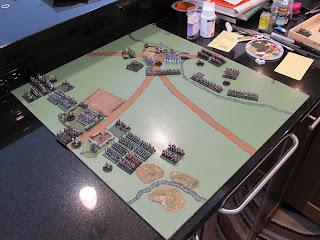 The terrain boards are Masonite (or "hardboard" for my Brit readers...), simply painted with roads and rivers to be used "geomorphically"... I made them a long time ago for a Franco Prussian War 15m collection that I still occasionally play...and since the "Black Powder" rules do encompass that period as well, I may break out my Franco Prussian War stuff as well.

Nothing better than a great "toolbox" set of rules!
Posted by littlejohn at 4:38 PM 3 comments: