A First Time For Everything 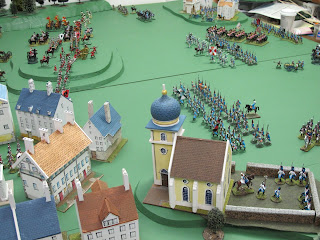 Being a guy who plays Grant's "The Wargame" mostly when using my 18th century collection, I never had an occasion in all these years to try out "Charge" by Young and Lawford. Since my figures are individually based it seemed a shame that I had not given the rules a try (something I suppose no self-respecting old school guy should tolerate...it simply won't do!), so last weekend I dismounted all my figures from their usual magnetic trays to have a real experience playing a large battle in the classic manner. 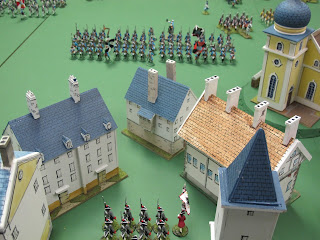 The battle was a simple set piece affair with a large town on one flank (an excuse to set out all my buildings...). 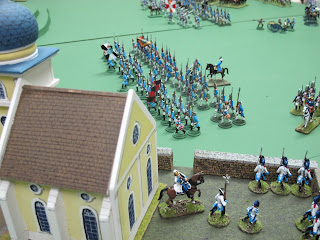 "Charge" is pretty quickly paced with long movement rates and decisive combat results, (after playing the more "stately" pace of The Wargame, firefights and artillery in this game cripple units at an alarming  (but fun) rate.

My larger 36 man units broke down fairly neatly into 2, 16 man companies called for in the rules...the two company structure allowed a bit more flexibility in deploying but coupled with the firing rules, the units are more brittle. (I've heard somewhere that these rules have a more Napoleonic flavor...but I'd have to play it more to be able to say...)


Being a solo player I usually balk at moving lots of individuals around but really it doesn't take all that much longer to get moves done. 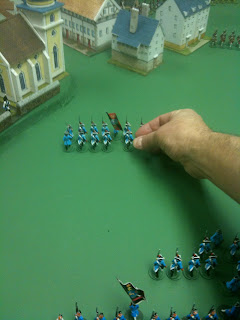 I'll probably set this up again and gives the rules another go...and after that hopefully give Ross McFarland's "Hearts of Tin" a try since he has updated the rules since I last had a chance to play them a good while ago. 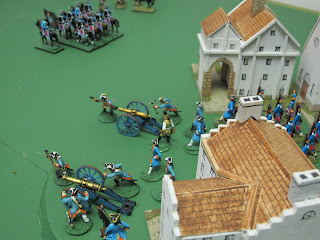 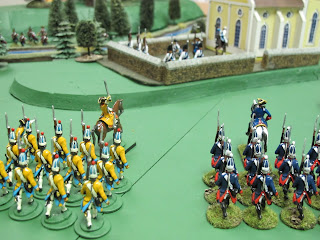 And finally, a few shots of my recently completed windmill (with Mk I blades simply drawn on to thin wood)...I'll probably upgrade these someday when I have the inclination. 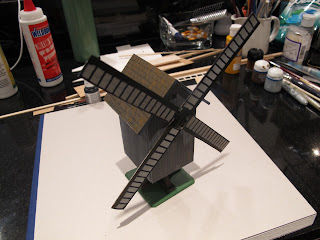 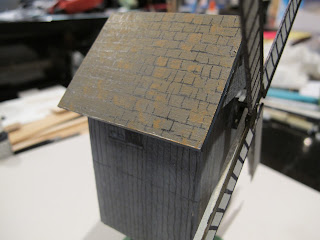 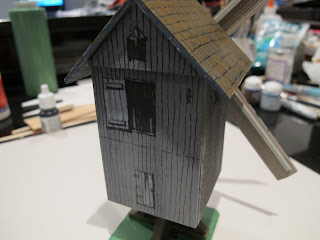 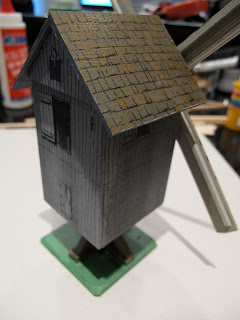 Posted by littlejohn at 8:50 AM

Looks like it was a fun battle! Neat to see all of your buildings out too. They are impressive structures.

I agree with Stokes.

I think the windmill looks quite good as it is and fits in with your other buildings.

Simply love your armies and buildings...

So what did you think of "Charge" vs "The War Game"? Does a preference leap to mind? Or were there things you preferred in each that you liked better than the other?

I'm still pretty happy with "The Wargame" for 18th century, but there were some aspects of charge that I think would work well for Napoleonics...I have long contemplated a classic wargaming 20mm project using Naps, and I think I'd organize and fight them as per "Charge"

...but perhaps with reduced casualty rates.

AHHH! Still my favorite published set of rules. But, yes, they can be very.....decisive.

I look forward to hearing how HofT works out. A very different kettle of fish.
-Ross

I like 'bloody', mainly for the psychological effects on certain types of player. Not everyone can stand watching holes being battered into their pristine lines...

The Napoleonic feel of 'Charge' has I think to do with the handling of light troops (skirmish clouds, light companies integral to line infantry battalions) and the response to cavalry charges. I gather that in the 7YW an infantry unit caught isolated might form square, but in general infantry felt confident enough to see off enemy horse by musketry alone (provided, of course, they didn't come upon you from the flank, like Krosigk's Horse at Kolin).