What To Do With All That Old Micro Armor 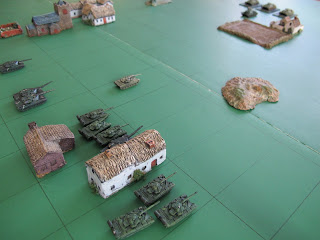 OK since my son is clearly addicted to my iPad primarily because of the very popular "Plants vs Zombies" game...and much as I try to limit his time on it... I have decided to launch a counterstroke on behalf of tabletop gaming by breaking out a pile of old microarmour and 10mm scale armor and cooking up a set of rules that essentially turn "Plants vs Zombies" into a basic wargame that my 5 year old can understand. essentially the American M1s and Bradleys are the Plants and the Russians T-72s and BMPs (with a few exceptions and mixing on both sides) are the Zombies (no offense to my Russian friends!!) ...and it's no surprise that he got it immediately!
We used a gridded sheet of green foamboard that I was using to work on some 6mm Naps rules and a few buildings and we were off and running.

Basically the "Zombies" moved relentlessly across the table moving 2 grid squares per turn and the "Plants" shot them to pieces with a simple d6 5-6 hits rule that gave the little guy just enough suspense...and dad could push the Zombies and enjoy his martini in the process...much like the iPad game he loves so much, except dad got to be there for it...a huge difference between that and a checked-out kid wired into a video game!

And, since I don't do much in the way of small armor stuff anymore it gave the stuff I had a much needed outing before I sell it on ebay!

Posted by littlejohn at 3:18 PM

Labels: It's All Good, WWII

What a nice simple game ... and one that sounds like you both enjoyed!

Don't sell them until he tires of the game (and you've introduced him to something else).

Congratulations on a fine idea, sir.