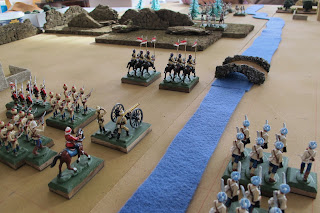 Re-set my gridded table to 1878 for a little Northwest Frontier action Portable Wargame style, this time using Bob Cordery's "Big Battle"  19th century revisions to the rules. In recent months I've managed to add a few units to both sides of my NW Frontier collection so this battle proved to be pretty big.

I also used some simple cardboard buildings I built a while back using boxes from the local "Michaels" craft store...You can see a tutorial for making them here. 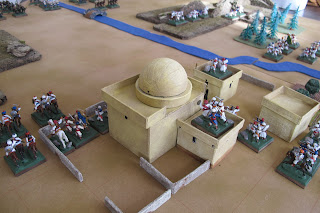 I'm also using my added "heroic action" rule in this game where an attached individual leader figure (except the CinC)  can force a re-roll of any close action dice and taking the second outcome...while risking a D6 4-6 roll to eliminate the leader for exposing himself heroically in the action...The British typically have one or two leader figures for each 3 stand "Battalion", and the Pathans have one leader for every 5 units. 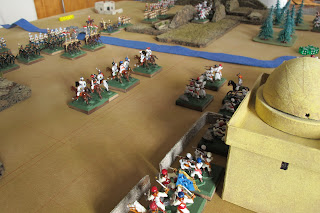 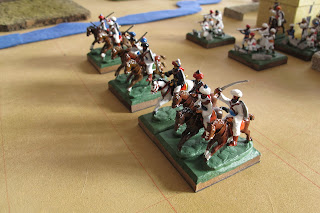 The figures are a mix of Jacklex 20mm and Ral Partha 25mm...and after some initial trepidation at the slight scale difference, I've grown accustomed to it and the units all seem "in scale" to me now. Especially since I mixed figure scales in the Pathan irregular bases. It surprisingly looks just fine. 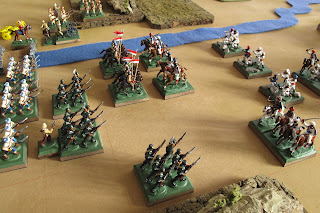 The Jacklex cavalry actually works better for this basing style (40mm squares) since I can fit 3 cavalry to that size base.


Finally, I did find the Portable Wargame Big Board rules to be "cleaner" than the earlier versions. I particularly liked the simplified activation die rules. I did find myself "tinkering" with the Close Combat rules. They seemed to be a bit indecisive in that units could "lock" into close combat and not be able to get an outcome for several turns (particularly cavalry since it only takes a hit on a "1" in close combat so two cavalry units would stay locked in close combat for several turns without a result). So I tried the following rule change:

Units hit in close combat only translate "hits" as follows:

This rule adjustment served to both speed up the game just a bit and to make Close Combat more decisive...sort of a balance I think between Bob's intent and Morschauer's more "bloody" basic combat resolution approach where hits always eliminate. It also serves to differentiate fire combat results from Close Combat and at least it gave the Highlanders a reason to charge that heavily defended ridgeline!

But regardless, it produced a fun Sunday's diversion, and some thoughts about a possible campaign using a "squared" larger map that is scaled to my tactical table size of 18x18 grid squares so each grid square on the map would be a "table".  The battle rules are clean and fast so running a campaign could actually work, and I can spice it with some skirmishes using "Sword and the Flame" if needed.

Graet looking game and some interesting rules ideas.Thanks for posting this.I too find the gridded games to be both stimulating and fun

A great looking wargame and an excellent battle report.

I like both the rules changes that you have made, and think that they suit the Coloinal period very well.

I am currently revising all the various versions of the PW rules so that they follow a common format wherever possible. The intention is that players can then chose which version of the rules suits them best ... and then play around developing their own versions.

Having a map with a squared grid with each square on the map representing a battle board makes ideal sense for a campaign. This would be less easy to do with a hexed grid or map ... and makes sticking to a squared grid a very sensible decision.

PS. I will be giving your latest battle report a 'plug' on my blog later today.

Very neat looking game and I liked the cork tile ridges - very effective. The figures look suitably heroic and I like the rule you have incorporated for Heroic leaders/actions - very 'Colonial' in intent!

I second that the cork hills look great, brings the Maj Gen to mind. I was looking at pictures of Afghanistan this weekend, amazing contrast between the green fertile valleys and bare rocky hills that look a lot like cork tiles.

I was happy to see the Jacklex as well since I've been thinking of getting some. They look like they will also mix with the Scruby 25mm.

I tried your link for the tutorial on buildings but got bounced as I "don't have permission". Any advice on how to get there? I may well be that the problem lies between the chair cushion and the keyboard!

And I too love the ridge lines!
Cheers
PD

Great looking game/setup! (also good to see a Colonial game report as I'm not into anything post-Victorian era in gaming myself. ha!)
But seriously, I do enjoy seeing your adaptations to Bob's Portable Wargame. I'm tempted to get back into it myself "one of these days" and ideas like yours give me food for thought.

What an excellent game and it looks like you had a lot of fun. Fun is missing from many games!

it was a post published on 8/2/2009 so maybe if you click on the "buildings" tag blogger will get you there...but given blogger's uneven proclivities...that's not a certainty...just let me know if it doesn't work and I can send you the page link via email.

@Niel...given my advanced age with little kids and even less time, FUN is the watchword around the Lead Gardens these days!...otherwise my lovely but impatient wife comes in with the "is this all you've been doing all afternoon?" thing...and I want to be holding on to something other than a thick stack of "combat charts" when that happens...for my own sanity and hers...lol...!

The link still bounced but the "buildings" tag worked like a charm. I am in awe over your buildings and very inspired.